This is the sketch-y origins of this site, one could say 😉 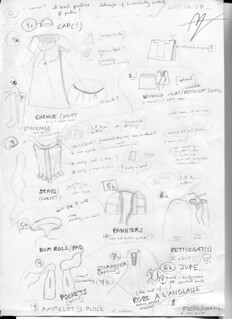 I started doodling because I realised if I wanted to make a robe à l’anglaise in en forreau style, I need the at the time contemporary underwear, because it (and other robes) is designed to be worn with them underneath. And very much requires sturdy underwear, since there is a lot of fabric to strut around in.

And the best way to get an overview was to start sketching. When researching this it turns out the layers are..

¤ headwear
– aka cap of some sort (sometimes even a larger cap/hat was worn over another, for when going outside)
– because women then always wore one of these, bathing often was not a luxury and head-wear helped protect the hair, however very informal and for some formal situations a smaller cap was used, or not at all!

¤ chemise
– the innermost layer worn against the skin
– some sources claim just about knee-length or below, others mid-calf, but maybe the more posh the more and better fabric to spare, and not needing to bother with it getting in the way/getting dirty quick if very long?

¤ stockings
– aka long socks! reaching a few inches above the knees
– they hadn’t very elastic materials back then, so was held in place with a garter, tied around each stocking below the knees, yet many illustrations show garters tied above the knee, but this is not really practical, it may however have been done intentionally by seductive ladies, or artists who thought it’d be nice to spice things up..

¤ shoes
– most likely leather kind with a pointed toe, and with buckles, but there were a few other designs that looked more slipshoe-y
– why put on them already? because once you wore the stays you couldn’t really bend well at the waist, unless of course you wore so called mules that you could easily step in to when standing straight up, or had a maid to help get you get dressed

¤ stays
– which is often incorrectly thought of as a corset, but it isn’t ’til the 19th century the first corsets appear, stays “they mold, shape and hold (stay) the female torso” [x]
– when well-fitted it should be comfortable to wear it, not intended to be that tightly laced, more to give the torso a V shape by pushing the bosom upwards and slim down the waistline
– sort of like their version of a bra, every gal wore one, and if one didn’t know how to make one, one could buy one made out of cheap leather from a shop

¤ ditto
– aka a modesty skirt, because should it be windy or the horrors should a lady stumble and accidentally expose her ahem under layers, if not more! then this skirt that was a bit narrow and knee-length at most, would help keep things covered
– back in the days very much needed, cuz no panties! :O in other words, an optional layer nowadays

¤ bum roll / panniers / hip pad
– aka how to expand hips and get that fashionably wiiide skirt volume/fullness
– might take some experimenting to get the right volume, depending on your figure type, stays and fake hips used

¤ pockets
– aka cloth bags, often embroidered, with a string attached, for tying and fastening around the waist
– there really was no other way back then of solving the how-do-I-carry-stuff-with-me for a lady, in other words an optional layer

¤ jupe
– aka over-petticoat, the visible petticoat
– had side-slits, so pockets under the petticoats could be reached

¤ robe à l’anglaise
– aka top layer, for a robe à l’anglaise consisting of a fitted bodice and over-skirt (with an open front, showing the jupe), cut from one piece, using en forreau style of pleating
– another less fabric consuming pleating/cut, called quarter back, uses 4 pieces of fabric for the back, hence the name
– robes were usually kept in place in the front with pins, ribbons or hooks (because in this case/robe design, a so called stomacher is not used, a choice making this dress dither even more on the “informal” scale)

¤ Kerchief / Shawl / Fichu
– aka a kerchief/shawl/fichu (depending on where one lived, there were different terms), because we’re not done yet!
– used to cover up the bosom area, but for formal events like a party/ball ladies would not need to wear one

And thus the term fully dressed makes more sense, since for court one was expected to be just that, and as extravagantly as possible, of course!
ie, one covered the entire body in an appropriate manner, depending on the situation, and wore dress clothes. If my research is correct, that meant robe à l’anglaise, robe à la polonaise and robe à la francaise, with stomachers and overall fancier/more formal (will post about that robe later) made with expensive materials and extra poufyness to the skirts added thanks to panniers underneath. So a commoner, especially one working, would by default would have worn clothes that would qualify as “undress”, compared to court ladies that would have been “fully dressed”.

Hello there! You’ve come to my new virtual wardrobe corner of the web..

I’ve always ogled historical costumes, and now’s the time to finally try and make something on my own.

Still not entirely happy with the blog setup, I’ve yet to fiddle with the font settings, mainly for size. But as always, so easy to get caught up in small details, when they’re not really overly important, other than for my OCD sense of wanting things just like so.. which indeed also can be applied to practical things like sewing project as well, so time to do something about that! Because practice will hopefully make something closer to perfect, in the end..

I’ve also a tendency to get burned out while on a certain subject/research topic, so this blog is my attempt to better plan ahead an pace myself. And not do EVERYTHING at once, too late.